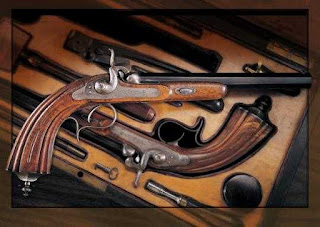 "I must speak with you, Duchess.” Philippe paused wondering how she would handle the impending news about the duel. “Tomorrow at dawn, your husband and I are to meet and settle things once and for all.” He paused for a moment while he studied her face watching for subtle changes in her demeanor.

“Oh, really?” she drawled, with little concern. “Some sort of manly challenge, is that what you’re saying?”

“Yes, I’ve challenged him to a duel by pistols. I felt obligated to inform you, Duchess, in case you wish to see your husband beforehand. The outcome might be less than desirable for your future.”

The Price of Deception contains many themes between its pages, and one is the rivalry between two men over the possession of one woman. When I began writing the book, I had not considered a duel between the two. I was more focused on the emotional aspects of breaking up their marriage, but as I continued to develop Philippe's character as a man of absolutes, who lived by a code of honor, it became quite clear there was only one way to bring to a conclusion the fight for Suzette--a duel.

Phillipe, of course, had a military background in the French Navy. Men often settled their differences through dueling in France, so the thought of using that means to rid himself of the blackguard in his life, Robert Holland, was the one course of action that made sense to an angry man. It was a means to gain satisfaction for the dishonor done to his name. Philippe could face his rival and do him in once and for all without being hung for murder.

Of course, there were rules to the game, even if the game was illegal by the time my story was written. Nevertheless, duels continued and not many were prosecuted over the act. Basically, if a man wanted to regain his honor from the offender, the first course of action would be the challenge or what is terms as, "throwing down the gauntlet." Philippe throws his glove at Robert's feet, who kicks it aside rather than immediately accepting the challenge.

Once accepted, the location and weapons were chosen. Each man brought a representative to witness the act and check the pistols beforehand. The challenger set the rules as to location, weapons, and number of steps to pace off. It was his call.

The type of duel could either be any of the following: (1) to first blood, which meant until one was wounded; (2) until severely wounded and unable to continue; or (3) to the death. Each pistol had one shot, and if there were misses the first round, the guns were reloaded and they would continue until one of the above conditions were fulfilled but usually no more than three reloads.

If you wish to read more about dueling and one of my sources for information, Wikipedia has two good articles. Follow the links to:

Needless to say by the end of the pace off between Robert and Philippe, one man leaves in shame. When I read about the practice, one wonders if duels really settled the matter and regained the honor for the individual who suffered the offense. I suppose if you were the winner, you'd feel smugly vindicated. However, I wouldn't think you'd feel that way if you were at the losing end. A wound or death over your need to be satisfied would be devastating to a man who lived by a code of honor. Nevertheless, Philippe suffered offense, and he was determined to find satisfaction.

Posted by Vicki Hopkins at 5:42 AM No comments: 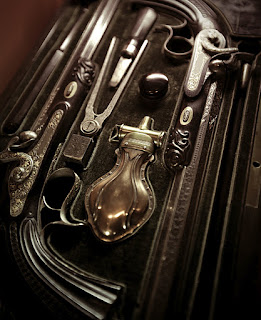 For all of my former subscribers over on WordPress, welcome! As you can see, I have migrated the entire blog to Google Blogger. Why? Exposure and rankings. For years I have blogged on this platform but thought I would try WordPress. Unfortunately, I just don't receive the desired traffic on that site, so I've returned back to my roots. I hope you enjoy! Feel free to subscribe via email as you have in the past. In addition, I'll be moving over some of the comments too, but most of the site is complete.
Now, for the news. Yesterday, I hit the release button on Lightning Source, my print-on-demand printer, to distribute The Price of Deception. I received the proof last week and painstakingly read through it one more time finding a few things that needed correcting. However, I'm happy to report the correct manuscript was uploaded and the release button checked. You should see it slowly appear on Amazon, Barnes & Noble, and other books sites. I'll publish updates and links as they go up one by one.
I'm very thankful the process has ended. It's been a long one. When I finished reposting all of my previous articles here, I noted that I finished the first draft back in August. It's taken almost three months of edits and manuscript tweaking to get here! However, I truly hope you enjoy! Below are a few of the comments going up on The Price of Deception already, plus a link to the prologue of the book to whet your appetite.
A special thank you to all of my friends, beta readers, cover designer, and editor for their help in this release. Without you, I wouldn't be here. Now it's time to write another. Otherwise, my brain gets no peace.
"I am completely obsessed and can't put your book down. It's amazing!!!!!"
"The Price of Deception grabs you from the first page and never lets go as the characters come back together for a heartfelt novel full of twists and turns that keeps you guessing!"
"As a huge fan of The Price of Innocence, I knew the author had a huge task ahead of her when it came to creating a sequel that would meet my expectations. However, Vicki Hopkins has not only met my expectations.. but exceeded them!"

Posted by Vicki Hopkins at 9:27 AM No comments:

Off To The Press

The Price of Deception is off to the presses at Lightning Source. I'm hoping it will be available for purchase in the next two weeks.

The Kindle version and other eBook formats have been selling and feedback is slowly trickling back to me via word of mouth and through one Amazon review. So far, so good. People are pleased with the story and somewhat shocking ending. Whew! It's such a nerve-racking experience releasing a book.

The Price of Innocence is currently lagging in availability on Amazon. If you want to know why, please click HERE and read the current tactics of Amazon. I'll be dealing with the problem in the next few weeks. If you wish to purchase book one, then I encourage you to visit Barnes & Noble or Book Depository, who can give you a quicker turnaround of that volume.

Other than that, I'll be posting some tidbits in the next few weeks about some of the topics I researched for The Price of Deception for your reading enjoyment. Periodically, I'll be working on book three, The Price of Love, tying up the loose ends of the story.

Other projects I have in the burner include my first paranormal romance, Radcliffe. Visit the website by CLICKING HERE for more information on that goodie. I've also created a blog to pen my journey on the dark side. You can find a link to the blog HERE.

That is all the news for now! Thank you to my faithful readers and those who enjoy my stories. I cherish you all, for without you, I'd be home doing crossword puzzles rather than creating worlds.
Posted by Vicki Hopkins at 8:54 AM No comments: