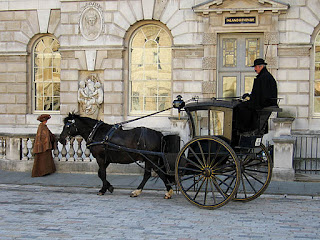 Transportation in the 19th century was an interesting read. In previous books, I pretty much used the term carriage when speaking of any type of movement from one part of the city to another. However, in The Price of Deception, I did get more specific about the types of carriages my characters took for their rendezvous and travels.
You'll find the term hansom cab used throughout the text, and later on I just reference a cab. It denotes the type of carriage in the picture to the left, which was drawn by one horse. The rider sat up back, and the housing of the cab sat two people. It was open in front, except near the legs. The sides had large windows, and the back was solid. They were popular means of transportation throughout the cities.

The term carriage starter is a new one, as well, that you'll see in the text. They were individuals who stood upon the curb and hailed down passing cabs for pedestrians. Robert uses a carriage starter after his tryst at the brothel to hail a cab home to his waiting wife. 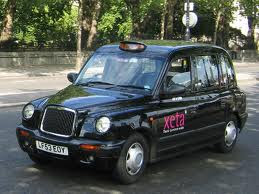 Later on, he hires a private enclosed carriage with a coachman, a growler, to pick up Suzette multiple times from her home. It was a four-wheel carriage, drawn by two horses termed a hackney. The hackney has evolved into the cute little cabs you see in London, which I had the privilege of hiring while in England both in Manchester and London. Who doesn't want to hail a cabby in London just for fun?

Jacquelyn arrives to her Paris townhouse in a coach, which was a large type of carriage used for long trips. Her trunks of expensive clothes and outrageous hats are stacked on the back and top.

Later on, Robert goes to the chapel in a landau, which is a convertible four-wheeled carriage drawn by two horses. They are great for romantic weddings, and you'll still see them used for ceremonies and hiring in various cities worldwide as a treat.

In the 19th century, streets brimmed with all sorts of carriages, public transportation carriage buses, and horses. To read more of the various types, follow the link to Wikipedia. Of course, with all those horses traveling the roads, there had to be individuals whose jobs were to pick up the horse droppings. The streets must have been interesting, bustling avenues of humanity during the time of The Legacy Series.

One of my scenes in the book is t 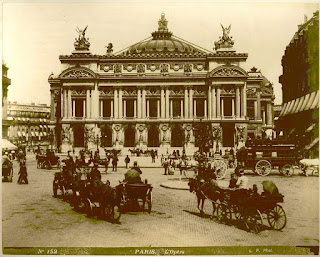 he evening at the Garnier with Robert and his wife, Jacquelyn. They arrive to a bustling crowd of arriving carriages. I stumbled across this picture on the Internet, and I thought it quite perfect for this article. If you close your eyes, I bet you can just picture yourself in one of those carriages, dressed in a 40-pound dress, with an outrageous feathered hat upon her head. Next to you is a handsome man in his black suit and top hat waiting to take you for an evening at the opera.

I hope that you enjoy the fantasy of romantic times in the Victorian era.
Posted by Vicki Hopkins at 5:26 AM