The History of the Legacy Series


I thought that I would take a moment to talk about The Legacy Series and how it came about. If you have not followed along at my Legacy Series Books Blog, you probably don't know the whole story.

The Price of Innocence was written in 2009. It is my debut novel.  I researched my fingers to the bone on that book, studying legalized prostitution in France, the infamous Chabanais brothel, and the challenges of the poor in 1870s Paris.


Since its release, it has garnished a lot of criticism, most of which started when the book hit the #1 spot in historical romance on Amazon for three days in a row in May of 2012.  Great to be #1, but it's almost like having a target on your back.  It was edited in 2009 by Autumn J. Conley, a book editor, who has been in the business for 28 years. In addition, it has been subsequently proofed and updated a few times by additional editors afterward.

Is it my best book?  No, but it was my first book -- the book that launched my career as a writer. Even though it may not be great, it did receive a favorable critique from organizations such as Writer's Digest and other good reviews from romance sites.  Like any other author out of the gate, you grow in your craft and learn.

The Price of Deception came about a few years later.  After release, I was hounded by readers to write the third installment. Many fell in love with the book, which frightened me that I would not be able to live up to the expectations for a third one.  Interestingly enough, I wrote it during a six-month period when I had huge challenges in my life.  I was caring for my eighteen-month-old granddaughter and working full time.  During those six months, I had pneumonia and then fell a few months later breaking my shoulder.  It made the best-selling paid list on Amazon a few times and the Movers & Shakers list, too, in 2012. It's times like these you take screenshots to keep the memories!

As much as my fans wanted The Price of Love, I frankly felt stumped trying to figure out where to take the story. I made premature promises on its release and let people down, for which I'm very sorry.  However, if the inspiration isn't there for an author, writing a story is torture.  It took me longer than I anticipated to decide what to do with Jolene and Robert, plus the remainder of the dysfunctional family.

Now that is past, the emails continue from fans to keep the story going. The Price of Passion has begun, but I'm off right now working on a new release under a different pen name.  I will return to it shortly and am shooting for the end of the year.  However, I make no promises.

As the series continues to either enthrall or enrage readers, it has sold over 18,000 paid eBook copies, plus many print copies, since the first book was released. In addition, over 22,000 free copies of The Price of Innocence have been downloaded. What is even more amazing, is that my sales on Apple and Nook have skyrocketed in the last six months regarding the series since The Price of Innocence went perma free.  I have only 48 reviews on Amazon and 222 ratings on Apple. That is astounding.  I'm hopeful that the series will continue to do well in the years ahead.

From the bottom of my heart, I thank those who have supported me as an author and sent some of the most moving and wonderful private emails letting me know your feelings about the series.  I've had a few comments that they'd love to see in a TV series.  Yes, in my dreams, too, but it takes getting noticed with substantial sales for that to happen.


Remember, the best way to thank an author for a book you love is to write a review -- even if it's just a few words.

Have a great weekend.  It's rainy and cool in Oregon, so I'm going to write to pass the time.

All my best,
Vicki 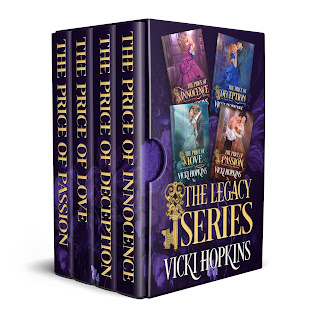 Posted by Vicki Hopkins at 11:57 AM No comments:

Email ThisBlogThis!Share to TwitterShare to FacebookShare to Pinterest
Labels: Amazon Movers and Shakers., History of the Legacy Series, The Price of Deception, The Price of Innocence, The Price of Love
Newer Posts Older Posts Home
Subscribe to: Posts (Atom)