The Price of Innocence is the tender story of Suzette Camille Rousseau, a young woman in late 19th century Paris, who makes a difficult journey from innocence to maturity. After losing a sheltered life with her father, Suzette is thrown into the harsh reality of poverty, struggling as a homeless woman on the streets of Paris. In order to survive, she faces difficult choices that offer little hope of redemption.

Her journey takes her from the charities of St. Vincent de Paul to a local laundry house where she toils endlessly in filth and squalor. To her surprise, one of her customers is the Chabanais, the most famous brothel in France that only caters to aristocrats. Like a fly drawn to a spider's web, the mistress of the brothel entices Suzette into a world of opulence, comfort, and beauty, but there is a price to pay— her innocence.

Succumbing to a life of prostitution, she meets a handsome English Lord who saves her from the unthinkable. When he spirits her off to another country, her past follows. A man, who refuses to forget his promise, relentlessly pursues Suzette intent on regaining her heart. He only wishes for one thing— to give her love and a life of respectability.

The author transports her readers back to another time and place, weaving facts of 19th-century life throughout the story.

In conclusion, The Price of Innocence is a stunning tale of two men, one woman, and the symbol of a flower that promises happiness. It's the first in a series of three novels continuing the story of its wonderful characters. 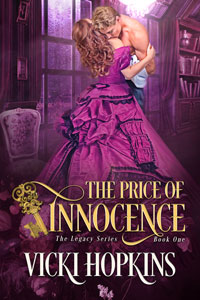