"The House of Pleasures" - A Shocking Movie About a French Brothel


A few months ago, I streamed this movie on Amazon Prime. I hesitated placing a review here, but have decided to relent. It is a graphically, shocking movie about prostitution in France in a mansion of tolerance, like the Chabanais where I set my book, The Price of Innocence. The movie is French ("L'Apollonide") with English sub-titles.

It has everything I researched for The Price of Innocence from registering as prostitutes with the Bureau of Morales, being indebted to mistresses and unable to leave their employ because of it, champagne baths with customers, selection parlors, global fashions worn by prostitutes, and opulent client bedrooms. It even had a scene where one prostitute in the movie said she had been a laundress beforehand, and prostitution was a better job compared to the horrible conditions in the wash house. (You would have thought they read my book!  It did confirm to me, though, that I got it right after months of reading about legalized prostitution in the late 19th and early 20th century France.)

The movie is filled with nakedness, sexually explicit scenes, etc., and not for the prudish or faint of heart.  In U.S. terms, think NC-17 rating.  There are scenes of abuse where one customer disfigures his purchase, which was difficult to watch.  Even though he gets his due in the end, it is disturbing.  However, it added to the reality of a life of prostitution, focusing on the sad and hopeless plight of women in brothels. The particular establishment depicted in this movie catered to aristocrats and rich businessmen, much like the Chabanais where I set my book. Even the mistress was as shrewd as my own character, Madame Laurent.

The movie is two hours, slow moving, and not the best flick you'll ever see. (Even though the critics on Rotten Tomatoes gave it an 81% rating.) In fact, it's disturbing to see the sad lives of these poor women working night after night in the house of pleasure. It's a job, and most of the sexual scenes show the men enjoying their paid visits, while the women merely go through the motions void of emotion. As troubling as the scenes were, I found myself transported into the world I wrote about and came away shocked at seeing the reality portrayed on screen. (Perhaps that is how I would feel if The Price of Innocence ever went on film.) 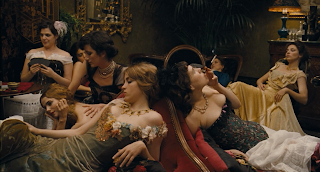 The scenery inside the brothel fit closely to my book--the staircase to the rooms on the second floor, pictures of naked ladies on the walls going up the stairs, and the different quarters for the women who boarded and lived together at the brothel.

There is also a scene of the prostitutes waiting to be examined by the doctor and his report to the mistress of the house. It was the usual examination each had to endure to check for sexually transmitted disease. As far as their personal hygiene, it was pretty much as I described.  They kept cleaned, bathed, used creams, and perfumes.  The selection parlor was filled with beautifully clad women for the choosing, and also topless women who served the men.

Should you decide to watch it, you have been forewarned.  The sexual acts are openly displayed.  There are full naked scenes of women and men. The language is crude, but of course in English subtitles where the "F" word is often used.

Let's face it, being a prostitute wasn't glamorous.  It was a profession that many poor and unskilled women chose in order to survive.  It was a dangerous job where women died of syphilis, lived lives with no hope, and sold their bodies in order to eat and have housing.  It portrayed a society that found pleasure in sex, living a way of life where brothels were an acceptable form of male entertainment until they were abolished in the early 20th century.

How did the movie end? The director showed prostitutes in modern Paris, standing on the street soliciting customers driving by in cars. The job is the same, but the working conditions are now a far cry from the lavish houses of pleasure that once existed in Paris, France.

Vicki
Posted by Vicki Hopkins at 6:32 AM